On a small family-owned dairy farm in Oconto Falls, Wis., home to 100 dairy cows and four little farmhands, Kayla Smith grew up and learned the ways of the farm. Kayla and her three brothers lived the farm life their entire youth, but when it came time to decide who would take the farm over from their dad and uncle, they all had other plans. Though the farm she grew up on is no longer milking cows, it gave Kayla many stories to tell and even more memories to cherish.

Kayla left the farm at 18 and headed to the University of Wisconsin-Oshkosh to study business. During her time in college, she worked at State Farm as an office representative for more than three years.

After graduation, she joined SECURA’s Claims Department. She was in the role three years when she learned of a position where she could put her years of farm experience and knowledge to good use with the Farm-Ag Underwriting team.

Kayla started as an associate underwriter in our Farm-Ag Department in January 2017. In this position, she underwrites insurance for farmers in Wisconsin and Michigan.

While most kids enjoyed a stroll down the road with the family dog, you could find Kayla walking one of the many calves that lived in hutches in her front yard. Kayla made five dollars per week feeding these calves and had names for each one of them.

“At the time I thought the pay was great, but looking back, I think my dad might owe me some money,” Kayla joked.

Living on a farm was especially great in the summertime. One of Kayla’s favorite memories is the hours she spent every day playing on the farm with her cousins and brothers. They never ran out of things to do or games to play; the fun was endless. One of their games resulted in a fractured elbow after Kayla fell 10 feet down a hay shoot. Once it healed, they were right back to their usual shenanigans.

When she wasn’t spending time with her four-legged friends or chasing her cousins, Kayla worked alongside her dad. After many failed attempts to teach her brothers to drive the haybine in a straight line, Kayla’s dad put his faith in her. She didn’t disappoint. Perfecting driving the haybine gave her both bragging rights over her brothers and paid for her car insurance.

From farming to underwriting 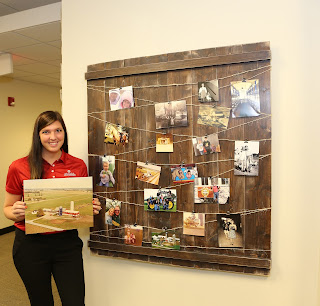 Growing up, Kayla never thought her everyday life would someday be of use in her career. Farm life furnished her ability to recognize the needs of farmers as well as truly understand what it means to walk a mile in their shoes. Having members like Kayla on our Farm-Ag team who have true firsthand experience is a great benefit for our agents and policyholders.

Whether she’s talking bulk tanks, milking machines, or silage, Kayla’s farm expertise is second to none. You can take the girl off the farm, but you can’t take the farm out of the girl.

Hazard Communication: What is it?