When Jenny VanDeHei left for college to study business, she thought she had picked her last stone and fed her last calf. She loved the family farm she grew up on, but she saw her future as an accountant, in an office building in the city, far from the country fresh smell of cow manure.

Never once did she think her life would come full circle back to farming nor that she would be so happy it did.

Jenny has found herself once again discussing combines, manure pits, grain trucks, and other vocabulary she’d learned firsthand listening to her parents discuss the farm around the kitchen table. After earning her degree at the University of Wisconsin–Oshkosh, Jenny started her career at SECURA. She began underwriting insurance for farmers in Wisconsin and has now taken on a leadership role as Supervisor of Farm/Ag Processing Services. She and her team of Customer Service Representatives send all of the insurance documentation out to agents and policyholders. She also spends time on project teams for the company and the farm division. 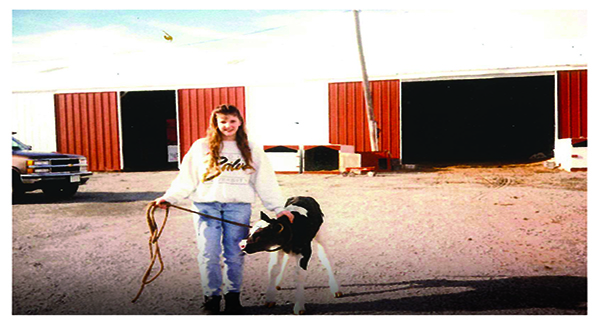 Jenny's life on the farm

Jenny grew up on a small family-owned and run dairy farm in Seymour, Wisconsin. It was started by her grandparents, eventually taken over by her parents, and still thrives today. They currently milk 75 head of cattle twice a day in a stanchion barn and care for 100+ Holstein heifer calves and dry cows while working 765 acres of land. They also had a custom harvesting business, which they sold a few years ago.“Running a farm with your family is no easy task,” Jenny said. “But when it’s all hands on deck to make sure all the work gets done, you become closer than most.”

From an early age, Jenny was responsible for cooking meals for the family after getting in from night milking and running hot and ready bag lunches out to the field using the old farm truck.

From April through October, Jenny spent most of her time driving tractor during the planting and harvest seasons. When she wasn’t doing that, she stepped in as a substitute milker, calf feeder, barn scrapper, and feed pusher. Like many farm kids, she was a jack of all trades and filled in wherever needed, whenever needed.

One of her favorite memories is picking stones—a non-negotiable chore—with the neighborhood kids. They would gather together and spend the entire weekend in the field picking stones wondering how on earth there was always more stones to pick, year after year.

From the fields to the office

Living and working on a farm instilled many life lessons Jenny values in her life off the farm. Farming taught her the importance of teamwork, and she learned the value of hard work and determination. These are values Jenny applies when trying to reach common ground on a project or to show appreciation when someone goes the extra mile. When she’s not supervising farm/ag processing services at SECURA, you can still find Jenny rolling up her sleeves on the farm—picking stones, driving tractor, or cooking meals for her family and the farmhands.

The knowledge Jenny learned through her firsthand experience combined with her years with SECURA make her a farm insurance expert for our agents and policyholders. For many of our Farm-Ag experts, training began when they were barely old enough to walk, and Jenny is no exception.

#SECURAGivesBack $25,000 on behalf of our independent agents